Canola is Canada’s oil. The name ‘Canola’ was registered as a trademark in Canada in 1978. The name comes from Can as in Canada and ola as in oil! 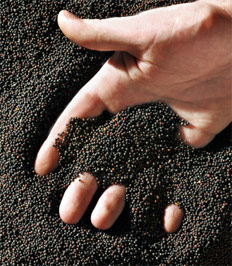 Canola is a plant that is a member of a large family of plants called crucifers. Crucifers are easy to identify because the four yellow flower petals form the shape of a cross. The canola plants grow to a height of one to two metres. The yellow flower produces seed pods that are about 5 centimetres in length. There is an average of 60 to 100 pods per plant. Each seed pod contains 20 to 30 tiny, round seeds which are 1 mm. in diameter. When it is ready to harvest, the plant changes colour from green to light yellow. These tiny seeds are crushed to extrude canola oil.

From germination to seed production, the life cycle of a canola plant takes about 3 1/2 months, depending on temperature, moisture, sunlight and soil fertility. Canola is a cool season crop. It grows particularly well on the prairies, where cool nights and hot days allow it to develop its unique fatty acid profile. Canola belongs to a section (or genus) of the crucifer family called Brassica. As well as canola, Brassica plants include mustard, Brussels sprouts, cabbage, cauliflower, broccoli and turnip. Brassicas are a major source of food in many countries, including Canada.

Canola’s contribution to the Canadian economy has increased by $7.2 billion, or 35 per cent, in the last 10 years, according to the latest independent analysis commissioned by the Canola Council of Canada and conducted by LMC International. This study shows Canadian-grown canola contributed $29.9 billion to the Canadian economy each year, including more than 207,000 Canadian jobs and $12 billion in wages.

For more information, read the executive summary here on the Canola Council’s website or view the full report. The name ‘Canola’ was registered as a trademark in Canada in 1978. The name comes from Can as in Canada and ola as in oil! The plant was bred by Canadian scientists, Dr. Baldur Stefansson and Dr. Keith Downey, who selected rapeseed populations when looking for a crop that would produce a healthy, edible oil product. Prior to canola oil, most of the oil Canadians used for food purposes was imported and people wanted a home-grown edible oil. Canola was selected from rapeseed through the knowledge and ingenuity of these prairie plant scientists. Canola is NOT rapeseed. It may look the same but it’s nutritional makeup is totally different. Canola came about only after years of hard work, research and countless field tests of new plant varieties.