The Manitoba Canola Growers Association would like to acknowledge the accomplishments of individuals and organizations who contribute to the sustained growth and prosperity of Manitoba’s canola industry. At MCGA, we have developed an annual award to be given to an individual who has made a contribution to the canola industry. Any individual or organization involved in the growing, production or marketing of canola is eligible to be nominated. Researchers and educators of canola, as well as chefs and media personalities who promote canola are also eligible.

Throughout his career at the University of Manitoba, Dr. Flaten has taught soil fertility courses educating a large number of both Diploma and Degree agriculture graduates. His soil fertility and crop nutrition management research has spanned across a number of crops working collaboratively with others. For example, in canola specifically they’ve looked at canola fertilization with novel fertilizers and combined fertilizers looking at toxicity risks and the crop response.

“Don is a brilliant, talented and enthusiastic researcher and educator,” says Dr. Cynthia Grant, recipient of the 2019 Canola Award of Excellence. “I have always admired not just his scientific contributions, but also his dedication in supporting his students and colleagues. Don is one of the kindest and most unselfish people I have ever met. It has been a privilege and a pleasure working with him through the years.”

In addition to research and teaching, another important aspect of Dr. Flaten’s job is the extension work he is involved in. This includes working on events like the Manitoba Agronomist Conference, speaking at Manitoba Ag Days or at Soil Fertility meetings, and delivering the annual Soil Fertility refresher course to former students.

“I’m very grateful to receive the Canola Award of Excellence,” says Dr. Flaten. “The Award indicates that I might have helped the canola industry and that’s the purpose of my job. It’s to help others whether its students or members of the industry through teaching, research or extension. My goals is to help others and if this help has been recognized as a positive thing than I’m delighted.”

Dr. Flaten grew up wintering in Saskatoon and summering on the farm near Weyburn Sasktchewan. He is now full time teaching in the research department of soil science at the University of Manitoba and will retire later this year.

Manitoba Canola Growers would like to thank Dr. Flaten for his contributions to the sustained growth and prosperity of Manitoba’s canola industry.

On account of her contributions, Dr. Grant was recognized with the 2019 Canola Award of Excellence from the Manitoba Canola Growers Association. Read more 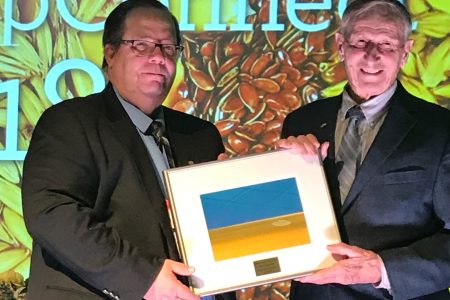 The meteoric rise of canola all started on a handful of plots in Western Canada with growers like Murray McConnell, recipient of the 2018 Canola Award of Excellence from the Manitoba Canola Growers Association (MCGA).

McConnell farms near Teulon, Manitoba, only about 40 kilometres from where Baldur Stefansson, one of the fathers of modern canola, lived. The McConnell family had been in the seed business since 1938, so it was natural for Stefansson to reach out with his new project in the late 1970s.

The Manitoba Canola Growers Association has awarded Dr. Carla Taylor with the 2017 Canola Award of Excellence for her contributions to the canola industry. Dr. Taylor, and her collaborator Dr. Peter Zahradka and their team of trainees and staff at the Canadian Centre for Agri-food Research in Health and Medicine, have been researching the health benefits of canola oil for more than a decade.

Mairlyn has been using and promoting canola oil for decades – for very personal reasons. “My dad was diagnosed with heart disease in the 1970’s (age 50) which started me off being interested in the correlation between healthy eating, healthy lifestyle and heart disease.” The diagnosis meant changes in her dad’s diet, including lowering saturated fats by using canola oil – he is now a healthy 93.

Visionary, Genuine, Perseverance are a few words to describe Bruce Dalgarno and his commitment to the canola industry. But for Bruce, it’s his passion that drives him to make a difference. His dedication to the canola industry was recognized on February 17, 2015 at Crop Connect in Winnipeg, MB at the gala banquet…

Dr. Dave Hickling was recognized for his work with canola meal. “You’ve heard of that one litre more per cow per day thing? Ya, I came up with that,” says Hickling with a little more than a touch of humility in his voice…

Ken is a canola pioneer in more ways than one. He was the inaugural president of the Manitoba Canola Growers in 1970, (known as the Manitoba Rapeseed Growers Association at the time) and worked alongside the likes of Bladur Stefansson, to eventually introduce canola, the first variety of rapeseed, to agriculture.

Chef Mary-Jane Feeke is about to add one more title to her venerable list that already includes pastry chef for Manitoba’s culinary Olympic team, teacher and owner of Benjamin’s Gourmet Foods in Selkirk.

Dr. Scarth received her doctorate from the University of Cambridge in plant breeding and genetics in 1981. After a post-doctoral fellowship with Agriculture Canada, Dr. Scarth joined the Department of Plant Science at the University of Manitoba. Dr. Scarth worked with Dr. Baldur Stefansson in the canola breeding program from 1982 until his retirement.

Charlie was born in Carman, MB on November 27, 1941. He received his grade school in the one room school in Homewood. His secondary schooling was in St. John’s Ravenscourt in Winnipeg and Western Military Academy in Alton, IL, USA. He received his Diploma in Agriculture from the University of Manitoba.

Jim Green is a partner in G-Six Farms Limited, a family farm operation, comprised of brothers Doug and Don and parents Russ and Mona. G-Six Farms produces grains, oilseeds and pulses, and is located 8 miles North-East of Brandon.

Dawn holds a degree in agriculture from the University of Manitoba. Over a 30 year career, she has provided communications consulting services in the field of agriculture to agribusiness and commodity groups. She also managed several farmer associations. Dawn provided consulting services to the Canola Council of Canada for two years before joining the council as its communications co-ordinator. In 1987, she left the position to become the MCGA’s first staff person as executive manager.

Max Polon holds a Bachelor of Science in Agriculture Degree (Lieutenant Governor’s Gold Medal recipient) from the University of Manitoba. He assumed responsibility for the family farm in 1969 while being employed part-time by the Special Programs Branch of the Manitoba Department of Education. Max began farming full time in 1980 and presently operates the family farm and pedigreed seed business.

During a long and productive career at the University of Manitoba, Dr. Baldur Stefansson made a major contribution to Canada, Canadians, and people around the world through his outstanding work in developing canola. Baldur, often referred to as the “father of canola”, was born at Vestfold, Manitoba, to Gudmundur and Jonina Stefansson, a pioneer Icelandic family. He was a modest individual with a keen sense of purpose.

Any individual or organization can make a nomination. The process is simple – obtain a nomination form through the MCGA website or by calling 204-982-2122. Each entry must include: